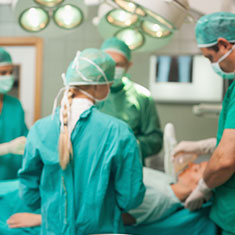 Some additional procedures we perform:

Thermachoice® and NovaSure® are both non-surgical, endometrial ablation procedures used to treat the lining of the uterus (endometrium) in women experiencing heavy menstrual periods. Your physician may recommend either procedure when birth control pills have been ineffective or have produced undesirable effects such as weight gain, moodiness etc.

Called “global endometrial ablation”, this safe eight-minute procedure removes the endometrium using a soft flexible balloon that is inserted into the uterus and filled with fluid. The fluid is then heated and the gentle heat produced causes the uterine lining to shed within seven-ten days, much like a period, although some patients just have a discharge. The majority of the women receiving the procedure report satisfaction. For many, periods stopped completely or menstrual bleeding was significantly reduced. Other results included reduced pain and cramping and reduced PMS symptoms.

Hysteroscopy is a hospital based procedure that is used to look inside the uterus. It utilizes a hysterscope, a slender telescope-like device, which is inserted into the uterus. The procedure is commonly used to:

Women who are pregnant should not have the procedure.

Novasure is a safe procedure using radio frequency energy (radio waves) to permanently remove the uterine lining (endometrium). The procedure is performed by your physician gently inserting a thin wand, with a mesh array, into the uterus. Once the mesh has conformed to the uterine wall, a radio frequency is generated for about ninety seconds and the wand with the array is then removed. Similar to the results from Thermochoice®, the uterine lining will be shed over the next week to ten days. Results have included a significant reduction in menstrual bleeding, stopped periods, reduced PMS symptoms and reduced pain and cramping.

Note: Endometrial ablations are not a form of birth control, and in fact, complications are increased if you do become pregnant. Therefore, birth control is still necessary.

The Genesys HTA System works by circulating heated saline throughout the uterus in order to ablate the lining of the uterine walls, also known as the endometrium. The procedure can be performed at the hospital or potentially in your doctor’s office.

Hundreds of thousands of women have been successfully treated by the HTA System. The majority of women see a dramatic decrease in the length and heaviness of their period. Once treated, most women no longer experience the symptoms or effects of a heavy period. Many women stop having their period altogether.

In a clinical trial, after three years the majority of women reported a reduction of bleeding to normal levels or less. In patients that completed the study, 98% of women were satisfied with their periods.

It is important for you to speak with your doctor to discuss all the options for the treatment of your heavy menstrual bleeding.